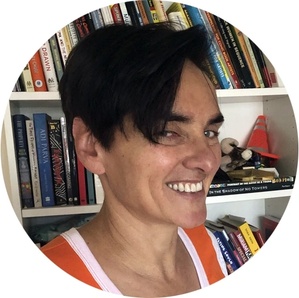 I was born in Lahr, Schwarzwald, in 1970. That's the Black Forest in Germany, which evokes images of dark pine forests and fairy tales. In addition to being thought of as the decades of free love and bell bottom pants, then big hair and mall bangs, the 1970s and 80s were also the apex of the Cold War Era—the decades after the Second World War, during which Capitalist and Communist forces stockpiled weapons and constantly threatened to annihilate one another. Kind of an epic battle. My family carried plenty of strife within it, too. I grew up wishing for peace and justice, and so I decided early on that I would be an artist and writer. I believed that art could change the world. Artists have been at the center of revolutions forever. I am still fully committed to this cause, an idealist who believes that art, writing, and teaching can heal injuries and injustices by making us care about—and engage with—all the big issues we're facing in the twenty-first century. I studied art and visual and critical studies at California College of the Arts, where I received a dual master’s degree; now I’m a PhD candidate in cultural studies at the University of California, Davis. I draw, write, and teach. In my free time, I run and backpack. I love spending time with my wife and two children and with friends, though during this global pandemic, most hangouts have to be virtual.